Within the Old Ratton Estate there is a small development of seven blocks of flats with each block comprising four flats.  This is known as Ratton Garden. 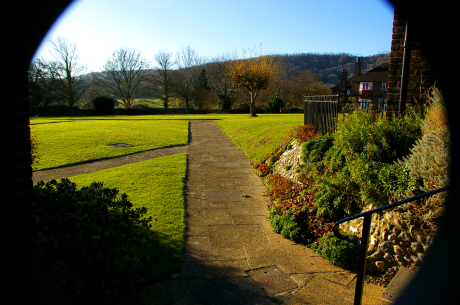 Ratton Garden was originally two large walled gardens surrounded by high flint walls with access via two wrought iron gates.   There was a Rose Walk dividing the two walled gardens.  These grounds were used to grow fruits and were just part of the kitchen gardens belonging to the Ratton Manor House.   One garden contained all the heated greenhouses producing exotic fruits, and the other garden grew all the soft fruits, including raspberries, strawberries, blackcurrants etc.  There were trained fruit trees on all walls around both gardens producing peaches, cherries, plums and pears.

The flint walls are still standing and some of the wrought iron work is still in place.   The owners of the flats purchased the freehold of the land ten years ago, and a Board of Directors is now responsible for maintaining the grounds and the properties in this lovely environment that is within the wider Old Ratton Estate